In the early days, two high rolling mills were used to roll plates and strips. Because the rolling pressure is very large when rolling plate and strip, in order to ensure sufficient rigidity, the roll diameter is required to be large enough. However, with the increase of roll diameter, the elastic flattening of roll also increases, so the two high mill can only roll thick narrow strip.

In order to roll thin and wide strip and overcome the shortcomings of two high mill, four high mill appears. Due to the use of small-diameter work rolls in the four high mill, the rolling pressure is significantly reduced, and the minimum rolling thickness can be reduced, so that thinner strips can be rolled. The stiffness is guaranteed by two large-diameter backup rolls, so the four high mill is very effective for rolling thin strip to obtain good shape. It should be pointed out that in order to compensate the elastic deformation (bending and flattening) of the roll caused by the rolling pressure and the thermal crown formed in the rolling process, the roll is usually configured with a certain original crown, which is usually called roll shape. Reasonable roll profile design plays an important role in obtaining high-precision transverse thickness difference and good shape. 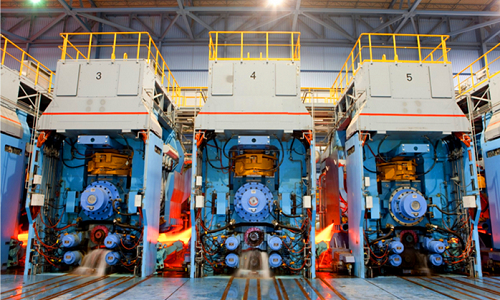 However, there is a fatal weakness in the structure of the four high mill for the control of plate shape and thickness difference (crown). As shown in the above figure, the contact parts of the two cylinders of the four high mill work roll and the support roll bear considerable contact deformation, and the rolling pressure is transmitted from both ends of the support roll to the work roll, which leads to the increase of the deflection value of the work roll, so the deflection value of the work roll is often greater than that of the support roll. The deflection value of work roll is obviously affected by the width of rolled piece. In the actual production, it is found that the strip rolled by the ordinary four high mill still has a large transverse thickness difference, which is often over thick in the middle (medium convex) and suddenly thinned at the edge, as shown in the figure, and the shape is not easy to be controlled ideally.

In view of the above, in order to roll the strip with excellent shape and eliminate the defects of ultra-thick in the middle and ultra-thin on both sides, it is necessary to improve the ability to control the deflection of the work roll. In order to achieve this goal, it is necessary to eliminate the harmful contact between the work roll and the support roll. Based on this idea, HC Rolling Mill is successfully developed on the basis of a large number of tests.