Development of electroslag furnace remelting at home and abroad

Electroslag remelting metallurgy originated in submerged arc welding in the United States. The basic principle of electroslag remelting was first proposed by R. K. Hopkins in the United States in 1935, and in March 1939, it was named "Hopkins method" and obtained a US patent. In theory, Hopkins and colleagues mistakenly believed that the remelting process was a "submerged arc discharge" rather than an electroslag process; technically, several issues remained unresolved due to exclusive closed production.

Electroslag remelting metallurgy originated from electroslag welding in the former Soviet Union. The Soviet Union Г.З.Вопошкевич found that the arc was extinguished in the process of arc welding longitudinal seam, the process was stable, and the quality of the weld was excellent, thus electroslag welding was discovered. After 1952, after 5 years of development and research by the Barton Electric Welding Research Institute, in May 1958, under the leadership of Academician Medoval (Б. И. Медовар), in the Ukraine Zaporos City Dnepol Special Steel Company Four 0.5-ton P909 electroslag furnaces were built, and the industrialization of electroslag metallurgy in the Soviet Union kicked off. 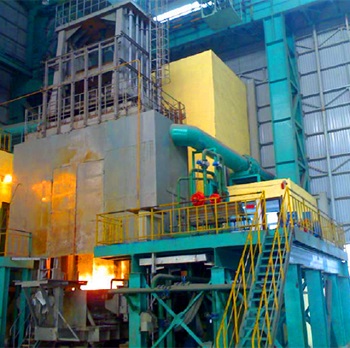 The compactness and chemical composition uniformity of the ingot obtained by electroslag remelting are higher than those obtained by vacuum arc remelting, there is no low-magnification defect, and the yield is high. Some well-known companies in the production of vacuum metallurgical equipment began to switch to the manufacture of electroslag furnaces, these companies are: Consarc in the United States, Loybold-Heraeus in the Federal Republic of Germany, Birlec in the United Kingdom, Bohler in Austria and Japan Vacuum Co., Ltd.

In the 10 years from 1965 to 1975, electroslag technology has developed rapidly. The development characteristics of electroslag remelting technology during this period are:

The electroslag metallurgy technology in my country started early, and the electroslag remelting experiment was carried out in 1958. In November 1959, Professor Zhu Jue of Beijing Iron and Steel Institute led metallurgical teachers and students to cooperate with the Electroslag Laboratory of Metallurgical Construction Research Institute where Li Zhengbang was located, and successfully developed aviation bearing steel by electroslag remelting method. In 1960, small industrial electroslag furnaces were successively completed and put into operation in Chongqing Special Steel Plant, Daye Steel Plant, Dalian Steel Plant and Shanghai Steel No. 5 Plant.

First, the products produced are billets instead of ingots, eliminating the need for blooming and billeting;

Second, the entire electroslag process is carried out under the condition of isolating the atmosphere, with a protective atmosphere;