Submerged arc furnaces can be divided into two operations: micro-slag method and slag-containing method according to the amount of slag output. The raw materials used in ferrosilicon and high-silicon ferrochrome are high in purity and contain less impurity oxides. No flux is added during production. 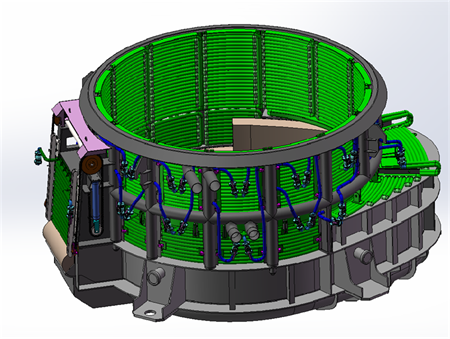 The amount of slag produced during the smelting process is very small, often called the micro-slag method. The raw materials used in the production of the micro-slag method are mainly silica, coke and steel scraps, and carbon ferrochromium is used in the production of silicon chromium. Carbon ferromanganese, carbon ferrochrome, silicomanganese alloy and other ore used contain many impurities and oxides, and need to add flux to make slag. Therefore, the amount of slag is large and exceeds the weight of the alloy, which is often called the slag method. In addition to ore and reducing agent, the raw materials used in slag method production often need to add flux.

The raw materials used in electric arc furnace production mainly include ore, including concentrate or purer oxide, (siliceous reducing agent and flux). The charge is added into the furnace from the furnace top or the furnace door. The entire smelting process can be divided into arc ignition, charging, melting, refining and tapping. The smelting process is completed by the arc exotherm and the silicon oxidation reaction heat. The tapping time depends on the silicon content in the alloy, and the production is intermittent.