Home » News » Transformer and its principles

Transformer and its principles

A transformer is a passive component that transfers electrical energy from one circuit to another circuit or circuits.A changing current in any coil of a transformer produces a changing magnetic flux in the transformer core, which induces a changing electromotive force (EMF) on any other coil wound on the same core.Electrical energy can be transferred between separate coils without a metallic (conductive) connection between the two circuits.Faraday's law of induction,discovered in 1831, describes the effect of an induced voltage in any coil due to a change in the magnetic flux surrounding the coil.Transformers are used to change the AC voltage level, this type of transformer is known as a step-up or step-down type to increase or decrease the voltage level respectively. Transformers are also used to provide galvanic isolation between circuits, and to couple stages of signal processing circuits.Since the invention of the first constant potential transformer in 1885, transformers have become an important part of the transmission, distribution and utilization of alternating current.A wide variety of transformer designs are encountered in electronics and power applications.Transformers range in size from radio-frequency transformers that are less than a cubic centimeter in size to units weighing hundreds of tons for interconnecting power grids. 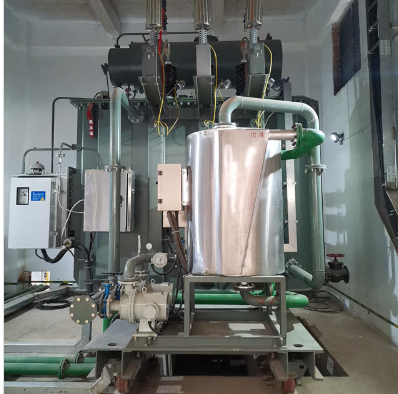 Core losses, collectively referred to as magnetizing current losses, include.

Hysteresis losses due to nonlinear magnetic effects in the transformer core, and the eddy current loss due to Joule heating of the iron core is proportional to the square of the voltage applied to the transformer.

Unlike the ideal model, the windings in a real transformer have non-zero resistance and inductance:

1. Joule losses due to primary and secondary winding resistance

2. Leakage flux escaping from the core and through one winding causes only primary and secondary reactive impedances.

3. Similar to an inductor,parasiticcapacitance and self-resonance phenomenon occur due to electric field distribution.Usually three kinds of parasitic      capacitances are considered and the closed-loop equations are provided .

4. Capacitance between adjacent turns in any layer;

6. Capacitance between the core and layers adjacent to the core;

Incorporating capacitance into a transformer model is complex and rarely attempted; the equivalent circuit for a "real" transformer model shown below does not include parasitic capacitance.However, the capacitive effect can be measured by comparing the open circuit inductance (i.e. the inductance of the primary winding when the secondary circuit is open) to the short circuit inductance of the secondary winding when it is shorted.

An ideal transformer model assumes that all flux generated by the primary winding connects all turns of each winding, including itself.In practice, some of the flux traverses a path that takes it outside the winding.This flux, known as leakage flux, causes leakage inductance in series with the mutually coupled transformer windings.Leakage flux causes energy to be alternately stored in and released from the magnetic field for each cycle of the power supply.Rather than a direct power loss, it results in poor voltage regulation, causing the secondary voltage to not be proportional to the primary voltage, especially at heavy loads.Therefore, transformers are usually designed with very low leakage inductance.In some applications, increased leakage is required, and long magnetic paths, air gaps,or magnetic bypass shunts may be deliberately introduced into the transformer design to limit the short-circuit current it will supply.Leakage transformers can be used to power loads that exhibit negative resistance, such as electric arcs, mercury and sodium lamps, and neon lights, or to safely handle loads that are periodically short-circuited, such as arc welders.Air gaps are also used to prevent saturation of transformers, especially audio transformers in circuits with DC components in the windings.The saturable reactor uses the saturation of the iron core to control the alternating current.

Knowledge of leakage inductance is also useful when transformers are operated in parallel.It can be shown that if two transformers have the same impedance percentage and associated winding leakage reactance resistance (X/R) ratio, the transformers will share the load power in proportion to their respective ratings.However, commercial transformers have wide impedance tolerances. Also, the impedance and X/R ratio of transformers of different sizes tend to be different.

RC and XM are collectively referred to as the magnetization branch of the model.

Core loss is primarily caused by hysteresis and eddy current effects in the core and is proportional to the square of the core flux operating at a given frequency.142–143 Finite-permeability cores require a magnetizing current IM to maintain mutual flux in the core.The magnetizing current is in phase with the magnetic flux, and the relationship between the two is nonlinear due to saturation effects.However, all impedances of an equivalent circuit are linear by definition,and this nonlinear effect is usually not reflected in a transformer equivalent circuit. 142 For a sinusoidal power supply, the core flux lags the induced electromotive force by 90°.When the secondary winding is open, the excitation branch current I0 is equal to the no-load current of the transformer.

The resulting model, while sometimes called an "exact" equivalent circuit based on the assumption of linearity, retains many approximations, can simplify the analysis by assuming that the magnetized branch impedance is relatively high and relocating the branch to the left of the primary impedance.This introduces errors, but allows combining the primary and reference secondary resistance and reactance by simply summing as two series impedances.Transformer equivalent circuit impedance and transformation ratio parameters can be obtained by the following tests: open circuit test, short circuit test, winding resistance test, transformation ratio test.

Transformer
Get the latest price? We'll respond as soon as possible